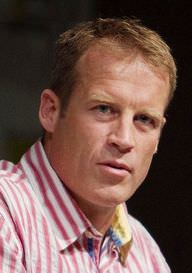 Film and television actor, Mark Valley is prominent for his role in the 2004 - 2008 American comedy-drama series titled, "Boston Legal" where he portrayed Brad Chase. He went ahead to feature in NBC's 2011 - 2012 drama series, "Harry's Law".

His siblings are Marnie, Jennifer, Lynne Valley. He was married to Australian actress, Anna Torv in 2008 and they both separated barely one year after. He is a father to Sherri Valley.

Valley picked up a nomination for the "Best Vocal Ensemble in a TV Special/Direct-to-DVD Title or Short" for starring in "Batman: The Dark Knight Returns, Part 2" (2013) at the 2014 ‘Behind the Voice Actors Awards’.

He served in the U.S Army and received a bachelor's degree from the ‘United States Military Academy’ in 1987 – there he studied mathematics and engineering.

People born on December 24 fall under the Zodiac sign of Capricorn, the Sea Goat. Mark Valley is the 2109th most popular Capricorn.

Aside from information specific to Mark Valley's birthday, Mark Valley is the 15096th most famous American and ranks 3rd in famous people born in Ogdensburg, New York, U.S.

In general, Mark Valley ranks as the 31228th most popular famous person, and the 3781st most popular actor of all time. “The Famous Birthdays” catalogs over 25,000 famous people, everyone, from actors to actresses to singers to tiktok stars, from serial killers to chefs to scientists to youtubers and more. If you're curious to see who was born on your birthday, you can use our database to find out who, what, where, when and why. You can search by birthday, birthplace, claim to fame or any other information by typing in the search box, or simply browse our site by selecting the month, the day, the horoscope, or any other clickable option.