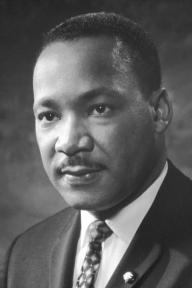 Martin Luther King Jr. was an American minister and Civil Rights leader who in the latter regard is considered to be one of the most-important figures in American, indeed even in world history. In fact, as of the onset of the 21st century he is the only American to have a national holiday named after him whom himself was not a former President of the nation.

Both his father, Michael King Sr. and maternal grandfather, Adam Daniel Williams, were Christian ministers. His mother’s name was Alberta King, and he had two siblings, Christine and A.D. King. He also had a grandmother (Jennie) whom he was very close to.

In 1953 he married Coretta Scott King, and together they birthed Yolanda, Martin III, Dexter and Bernice King.

Luther King Jr.  began attending Morehouse College at the age of 15 and earned his Bachelor’s degree (in sociology) by the age of 19.

He led a number of the most-important Civil Rights events in the history of America, such as the 1955-1956 Montgomery bus boycott.

Luther King Jr.  was the inaugural President of the Southern Christian Leadership Conference – a powerful Civil Rights organization – which was a position he held from early 1957 until his death in 1968.

He is considered to be the leader of the 1963 March on Washington for the procurement of Civil Rights for African-Americans. And while there he gave his iconic “I Have a Dream” discourse, which proved to be one of the most-famous speeches in American history.

Posthumously he was awarded the Presidential Medal of Freedom (1977) and Congressional Gold Medal (along with his wife in 2004).

And as of 2014 it has been estimated that there are nearly 1000 streets throughout the United States which are named in honor of Martin Luther King Jr.

Luther King Jr.  was adept in hymn singing and reciting Scriptures at the age of five and shortly thereafter learned to play piano.

He was well-recognized for his public speaking ability by the time he was in high school.

His father was also an influential leader and engaged in the Civil Rights struggle before he himself took up the mantle.

Although his birth name is Michael, he officially changed it to Martin in 1957.

He had serious beef with the FBI led by J. Edgar Hoover, who secretly recorded and then tried to blackmail him. 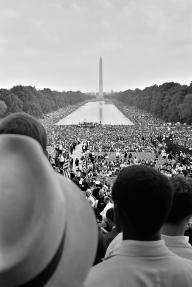 Title
Crowds surrounding the Reflecting Pool, during the 1963 March on Washington.
Author
Photo by Warren K. Leffler
Source
https://en.wikipedia.org/wiki/File:March_on_Washington_edit.jpg
Credit
This image is available from the United States Library of Congress's Prints and Photographs division
under the digital ID ppmsca.03130.
This tag does not indicate the copyright status of the attached work. A normal copyright tag is still required. See Commons:Licensing for more information.
License
Public domain 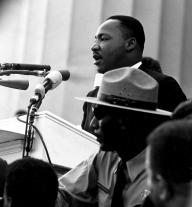 Title
Dr. Martin Luther King giving his "I Have a Dream" speech during the March on Washington in Washington, D.C., on 28 August 1963.
Author
Rowland Scherman
Source
https://en.wikipedia.org/wiki/File:Martin_Luther_King_-_March_on_Washington.jpg
Credit
This media is available in the holdings of the National Archives and Records Administration, cataloged under the National Archives Identifier (NAID) 542069.
License
Public domain

American 1st Director of the Federal Bureau of Investigation

Martin's birthday is in 120 days

How old was Martin when he died?

Martin Luther King Jr. would be 92 years old if he was alive today.

Where was Martin from?

People born on January 15 fall under the Zodiac sign of Capricorn, the Sea Goat. Martin Luther King Jr. is the 26th most popular Capricorn.

In general, Martin Luther King Jr. ranks as the 269th most popular famous person, and the 1st most popular activist / civil rights leader of all time. “The Famous Birthdays” catalogs over 40,000 famous people, everyone, from actors to actresses to singers to tiktok stars, from serial killers to chefs to scientists to youtubers and more. If you're curious to see who was born on your birthday, you can use our database to find out who, what, where, when and why. You can search by birthday, birthplace, claim to fame or any other information by typing in the search box, or simply browse our site by selecting the month, the day, the horoscope, or any other clickable option.