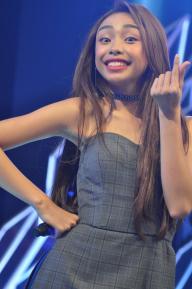 Marydale Entrata, simply known as Maymay is a Filipina actress, model and singer who gained prominence after winning Pinoy Big Brother: Lucky 7 in 2016.

She signed a contract with Star Magic and landed her debut role in romantic comedy film, Loving in Tandem. (2017)

Entrata was raised by her grandparents, together with her elder brother, Vincent. She has a step brother known as Rio, from her mother, Lorna’s second marriage.

She has been touted as the first Filipina to walk the runway in the Arab Fashion Week.

She was named the Best Novelty Song Artist of the Year at the Eduk Circle Awards in 2017.

She was selected as the brand ambassador for Megan Beauty Products in November 2018.

Marydale Entrata's birthday is in 219 days

Where is Marydale Entrata from?

She was born in Philippines.