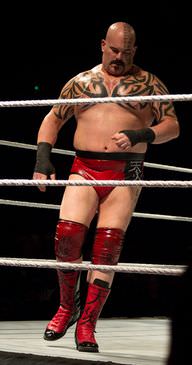 He married Farah Louise in 2005 and had two children from their marriage.

He won the IZW Heavyweight Championship and EXW Tag team championship once.

In 2007, he won the Best Team Tag Award with Travis Tomko, and the same award in 2011 with Karl Anderson at Nikkan sports.

In 2001, he was ranked number 32 among the top 500 singles wrestlers by Pro Wrestling Illustrated.

He once won the World Wrestling Federation Intercontinental Championship.

He briefly played for the San Diego Chargers in the National Football League.

He is approximately 6 feet 7 inches tall.

He has had at least 28 body piercings since he turned 14.

Matt's birthday is in 170 days

Where is Matt from?

He was born in Peabody, Massachusetts, U.S..

What is Matt Bloom's height?

People born on November 14 fall under the Zodiac sign of Scorpio, the Scorpion. Matt Bloom is the 532nd most popular Scorpio.

Aside from information specific to Matt Bloom's birthday, Matt Bloom is the 4051st most famous American.

In general, Matt Bloom ranks as the 6280th most popular famous person, and the 79th most popular wrestler of all time. “The Famous Birthdays” catalogs over 40,000 famous people, everyone, from actors to actresses to singers to tiktok stars, from serial killers to chefs to scientists to youtubers and more. If you're curious to see who was born on your birthday, you can use our database to find out who, what, where, when and why. You can search by birthday, birthplace, claim to fame or any other information by typing in the search box, or simply browse our site by selecting the month, the day, the horoscope, or any other clickable option.