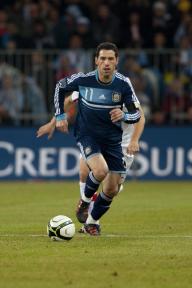 He is an Argentine football player, who is known for playing for several top clubs as a winger and sometimes as an attacking midfielder. He was born Maximilian Rodriguez. During his early 20s when he had just arrived in Spain, he is noted to have spent most of his professional career time playing for Atletico Madrid and Espanyol.

He soon continued his career with Liverpool in 2010 where he played until 2012. He left Liverpool for Newell's Old Boys in 2012.

He was born to mother, Claudia Rodríguez. His cousin, Alexis Rodríguez is also a footballer. He is noted to have been married to Gabriela Rodriguez. Atiana and Alma Rodriguez are his children.

He was named "Footballer of the Year of Argentina" in "2013.

He was awarded "Argentine Primera División top scorer" in 2014.

He won the "Supercopa Uruguaya" with Penarol in 2018.

Maxi Rodríguez's birthday is in 140 days

Where is Maxi Rodríguez from?

He was born in Rosario, Santa Fe, Argentina.

What is Maxi Rodríguez's height?