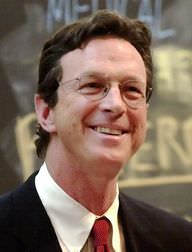 Michael Crichton was an American writer, director and producer. He is best known for his work in the sci-fi and thriller genres.

In 1994, he became the only person ever to have works simultaneously charting at No 1 in television ("ER"), film ("Jurassic Park") and book sales ("Disclosure")!

He wrote almost 30 novels and he wrote/directed/produced many films and TV series, such as "Jurassic Park", "Twister" and "ER".

He won an Academy Award, an Emmy Award, a Mystery Writers of America's Edgar Allan Poe Award and a Writers Guild of America Award.

He married 5 times and he had 2 children. He died of lymphoma at the age of 66, the date of the 2008 presidential election.

Michael's birthday is in 69 days

Michael Crichton would be 79 years old if he was alive today.