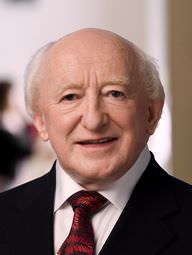 In 2018, he was re-elected for a second term of his presidency.

Before venturing into politics, Higgins was an actor who featured in films such as “The Book That Wrote Itself”, and “Cinema in Ireland”. As a writer, his works include “The Betrayal”, “The Prophets are Weeping”, and “Causes for Concern”.

His father is called John Higgins. He has three siblings. In 1974, he got married to Sabina Coyne. He is a father of four children namely, Michael Jr., John Higgins, Daniel Higgins, and Alice Mary Higgins.

In 2013, he was awarded the Grand Cross of the Order of José Matías Delgado by the Republic of El Salvador.

Title
Official Seal of the President of Ireland
Author
NAI, Office of the Secretary to the President
Source
http://commons.wikimedia.org/wiki/File:Seal_of_the_President_of_Ireland.png
License
Public domain

When is Michael D Higgins' birthday?

In how many days is Michael D Higgins' birthday?

How old is Michael D Higgins?

Where is Michael D Higgins from?