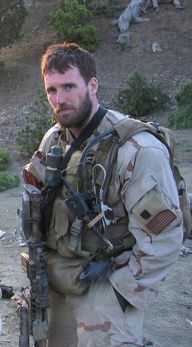 Michael P. Murphy was an American war hero who served in the United States Navy SEAL from 2000 to 2005. He was the leader of a team of four Navy SEALs that was sent on a mission (Operation Red Wings) in Afghanistan in 2005. He died heroically when his team was ambushed by Taliban forces in the remote mountains of Afghanistan. In 2007, at a ceremony at the White House, he was posthumously honored with the Medal of Honor, which is the nation's highest military award.

He was the son of Maureen Murphy and Daniel Murphy. At the time of his death in 2005, he was engaged to Heather Duggan. The couple was supposed to get married later that year.

In 2005, he became the first member of the Navy to receive the Medal of Honor after the Vietnam War.

All his men died during the Operation Red Wings mission, with the exception of Marcus Luttrell.

In the 2013 war film Lone Survivor which dramatizes the Operation Red Wings mission, he was played by Hollywood actor Taylor Kitsch.

Michael's birthday is in 214 days

Michael P. Murphy would be 46 years old if he was alive today.

He was born in Smithtown, New York, U.S..