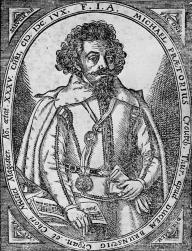 Michael Praetorius was a music composer best known for composing the “Syntagma musicum”, which eventually helped in the development of many Protestant hymns.

Praetorius attended the University of Frankfurt, where he studied divinity and philosophy. In 1587, after completing his musical studies, he was made an organist at Frankfurt’s Marienkirche. For the next couple of years, he served in the Wolfenbüttel court and later in the duke’s orchestra.

The German composer passed away in 1621 after an illness and was buried under an organ at the Marienkirche a few days later.

He developed a reputation for being one of the most prolific composers in the 16th century. During his time at court, he composed 17 volumes of music. He also produced “Musae Sioniae”, which was a nine-part collection of chorales and vernacular, as well as “Terpischore”, “Urania”, and “Polyhymnia exercitatrix.”

Michael's birthday is in 12 days

Michael Praetorius would be 451 years old if he was alive today.