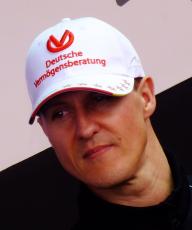 Michael Schumacher is a retired racing driver who is often referred to as one of the greatest Formula One drivers of all time. He won the Formula One World Drivers’ Champions seven times from 1994 to 2004.

He began his career with karting, winning many kart championships in Germany and Europe in the mid 1980s. He made his Formula One debut at the 1991 Belgian Grand Prix.

He is the son of Elisabeth and Rolf Schumacher. He has a younger brother Ralf who was also a Formula One driver. In August 1995, he married Corinna Betsch. The couple welcomed their first child, Gina-Marie in 1997. Their second child, Mick was born in 1999.

In December 2013, he suffered a traumatic brain injury during a skiing accident.

Michael Schumacher's birthday is on January 3, 1969.

Michael's birthday is in 98 days

He was born in Hürth Hermülheim, Germany.