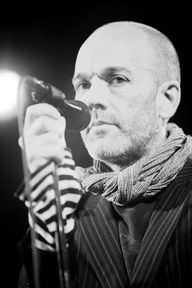 Michael Stipe is a singer-songwriter, film producer and visual artist who gained international stardom as the lead singer of the alternative rock band R.E.M. As a member of R.E.M. he released famous songs like Losing my Religion and Everybody Hurts.

His musical career began in 1980 when he formed R.E.M. with Peter Buck, Mike Mills and Bill Berry. In 1981, the band released its debut single Radio Free Europe and by the early 1990s, he and the rest of the members of R.E.M. had become music stars.

He has a younger sister name Lynda Stipe. He was romantically linked to author Douglas A. Martin.

In 2014, he inducted the band Nirvana into the Rock and Roll Hall of Fame.

Title
While clearing out the office I came across these photographs from when Rob and I went to Glastonbury while working at 4-D. Just plain fun
Author
Charlie Brewer from Sydney, Australia
Source
http://commons.wikimedia.org/wiki/File:Michael_Stipe_at_Glastonbury.jpg
License
CC BY-SA 2.0

Michael's birthday is in 30 days

He was born in Decatur, Georgia, U.S..