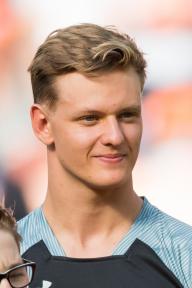 As the name might suggest, Mick Schumacher is a member of the famous Schumacher family known for their achievements in the Formula One series. The German driver participated in a number of karting competitions before joining the Formula 4 series in 2014.

His F1 career began five years later when he was named as one of the drivers of the Ferrari Driver Academy. In 2021, he participated in his first race at the Bahrain Grand Prix as a member of the Haas F1 Team.

His father, Michael Schumacher, is an F1 legend who won the competition seven times during his active days. He’s the son of horse rider Corinna Schumacher, and the nephew of former driver Ralf Schumacher. Fellow racer David Schumacher is his cousin.

The German driver won three Formula 2 Championships before making his Formula One debut. He also finished as the winner of the FIA Formula 3 European Championship in 2018.

At the beginning of his career, he used the nickname 'Mick Betsch' to differentiate him from his dad.

Mick's birthday is in 218 days

Where is Mick from?

He was born in Vufflens-le-Château, Vaud, Switzerland.