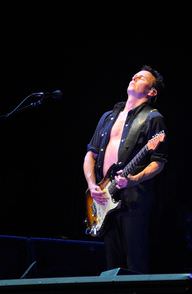 Michael David McCready, affectionately called Mike McCready, is a popular American musician and a Rock and Roll Hall of Famer who was the lead guitarist and also a co-founder of Pearl Jam, an American rock band. This collective was established by McCready in the year 1990 alongside Ament and Gossard. Also, he was a member of side project bands like Flight to Mars, The Rockfords, and Mad Season and Temple of the Dog.

McCready was raised in Seattle. At a tender age, he regularly played bongo drums. He purchased his first guitar and began taking his musical lessons at the age of 11.

The guitarist formed his first band named Warrior but later changed it to Shadow. Initially, it was a cover band which played at Roosevelt High School during free times.

He worked at a pizza restaurant after completing high school.

McCready decided to start a band with Stone Gossard, a childhood friend who appreciated his work after Gossard heard him perform “Couldn’t Stand the Weather” by Stevie Ray Vaughan. They later recruited Jeff Ament, a bassist, Dave Krusen, a drummer, and Eddie Vedderto to join the band which was later named Pearl Jam.

Pearl Jam became one of the most renowned bands after the release of “Ten” in the 4th quarter of the year 1991.

In 2005 the guitarist tied the knot with Ashley O’Connor and together they share three children.

McCready has worked with many notable artists including Neil Young and Peter Frampton. He worked with the former on his 1995 album “Mirror Ball”.

Mike's birthday is in 187 days

He was born in Pensacola, Florida, U.S..