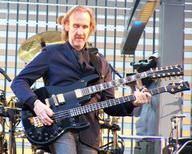 English musician Mike Rutherford is best known as one of the founding members of the rock band called ‘Genesis’. He helped to establish the group in 1967 and played a key role in the recording of their maiden studio album entitled “From Genesis to Revelation”.

Initially used as a backing vocalist and bass guitarist, Rutherford has also been credited for writing a number of the collective’s hit singles including "Turn It On Again" and "Follow You Follow Me".

Aside from the above-mentioned group, he has also performed with the Mike and the Mechanics band which he formed in 1985. With the band, he has released some popular songs like "The Living Years" and "Silent Running".

He’s the son of Anne and her Navy officer husband, William Rutherford. He was raised alongside a sister named Nicolette. He has been married to Angie since 1976 and they are blessed with three children named Harry, Tom and Kate.

With the 'Genesis', he became a member of the Rock and Roll Hall of Fame in 2010. He has also won the Ivor Novello Award and the Grammy.

He performed with his first band at age 9.

He was one of the founders of the now-defunct band, Anon.

Mike's birthday is in 56 days

He was born in Guildford, Surrey, England, UK.