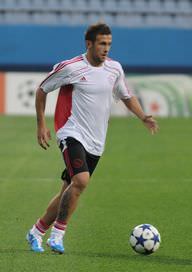 Miralem Sulejmani is an exceptionally talented Serbian who took interest in pursuing a career in soccer from a young age.

He began training with local teams in Serbia as a youngster, with clubs such as BSK Batajnica and Partizan, before making his professional debut in 2005. Since then, he has represented a variety of high-profile and successful clubs, including Partizan, Heerenveen, Ajax, Benfica, and Young Boys. Several individuals and club awards have been bestowed upon him over his career.

On the international scene, he played for Serbia's under-21 team in multiple tournaments, including the 2007 UEFA European Under-19 Football Championship, before joining the national team and playing in the 2014 FIFA World Cup qualifiers.

He was born to Miljaim Sulejmani.

He is of Gorani descent.

Miralem Sulejmani's birthday is on December 5, 1988.

Miralem's birthday is in 61 days

Where is Miralem from?

He was born in Belgrade, SFR Yugoslavia.

What is Miralem Sulejmani's height?