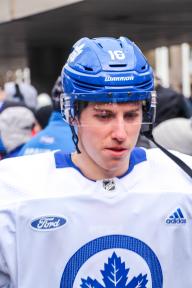 Mitch Marner, born Mitchell Marner, is an ice hockey player from Canada. His international debut for Canada came in 2014, at the Ivan Hlinka Memorial Tournament, where he helped his nation win gold.

In 2015, he signed an entry-level contract with the Toronto Maple Leafs, a Toronto-based ice hockey team. He has also served as the team’s alternate captain.

Mitch was born to Paul and Bonnie Marner. His older brother, Christopher, who is four years older than him, played hockey when Mitch was growing up. Mitch revealed that when he was younger, he wanted to be like his brother.

Marner has stated in the past that “Big Bang Theory” is his favorite television show while “Call of Duty” and “Grand Theft Auto” are his favorite video games.

Mitch's birthday is in 216 days

Where is Mitch from?

He was born in Markham, Canada.