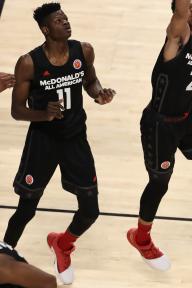 Mohamed "Mo" Bamba is an American basketball player who has played for the Texas Longhorns collegiately and Orlando Magic professionally. And whereas some pundits may be critical of his overall skill, in reality he was already famous before entering the NBA due to musical efforts of his homey, Sheck Wes.

He has an elder brother, Sidiki Johnson, as well as a half-brother, Ibrahim Johnson, who played college b-ball.

His mom’s name is Aminata Johnson and his dad, Lancine Bamba.

He was chosen as a participant in the 2017 edition of the McDonald’s All-American Game.

Coming out of high school Bamba was a five-star, i.e. top-ranked, recruit.

The Orlando Magic chose him with the eighth-overall pick in the 2018 NBA Draft.

A track Sheck Wes made in his honor, “Mo Bamba” (2017), has been certified quintuple-Platinum by the RIAA.

He and Sheck Wes grew up together in Harlem, New York.

Mohamed's birthday is in 310 days

Where is Mohamed from?

What is Mohamed Bamba's height?