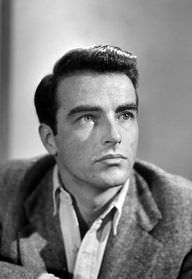 Montgomery Clift, also known by the nickname "Monty", was an American actor whose most notable film credits include 1948's Red River, 1951's A Place in the Sun, 1953's From Here to Eternity and 1961's Judgment at Nuremberg. Throughout the course of his career, he received a total of four Academy Award nominations, one of which was for his first screen appearance in the 1948 film The Search, in which he portrayed the character Ralph 'Steve' Stevenson.

He was born to Ethel Fogg Anderson and William Brooks Clift. He had a twin sister named Ethel and an older brother named William.

In 1956, he almost lost his life when he crashed his car violently into a telephone pole after falling asleep behind the wheel. Although he escaped with his life, he sustained severe facial injuries that forced him to undergo plastic surgery.

In addition to English, he spoke a number of languages fluently, including German and French.

Montgomery's birthday is in 320 days

How old was Montgomery when he died?

Montgomery Clift would be 102 years old if he was alive today.

Where was Montgomery from?

He was born in Omaha, Nebraska, U.S..