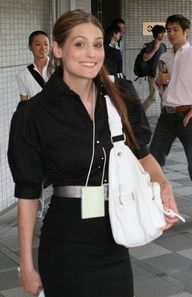 Title
Morgan Webb in a hurry. Although she was late for a meeting, she was cool enough to allow me to snap a quick photo.
Author
Gamerscore Blog from USA; modified by anetode
Source
http://commons.wikimedia.org/wiki/File:Morgan_Webb_in_a_hurry.jpg
License
CC BY-SA 2.0

Morgan Webb is an American television presenter and producer widely known for co-hosting the television program X-Play (formerly known as Extended Play and GameSpot TV). In addition to her work on X-Play, she is also known for her guest appearances on such talk shows as The Tyra Banks Show and Late Night with Jimmy Fallon.

She and author Robert Reid tied the knot in 2006.

She cannot read without glasses because she suffers from the optical defect called astigmatism.

Morgan's birthday is in 2 days