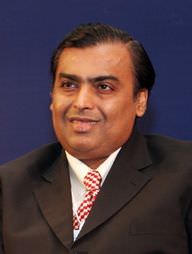 Mukesh Ambani is an Indian businessman who is the chairman of Reliance Industries Limited. In 2014, Forbes ranked him at #34 as one of the World’s Most Powerful People.

Mukesh attended Stanford University to pursue his MBA but with his father’s company, Reliance taking off he needed to leave school to help run the family business. The University of Baroda awarded him with an honorary doctorate of Science.

Mukesh Ambani's birthday is in 135 days

Where is Mukesh Ambani from?

He was born in Aden.