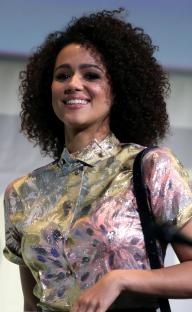 Soon after, she began featuring in various works and later landed her first film role in the 2012 British thriller film "Twenty8k" where she played Carla.

She officially broke into international stardom via starring in HBO's 2011 - 2019 renowned American fantasy series, "Game of Thrones" where she played Missandei.

She is noted to have a sibling named Louise Emmanuel.

She earned the "Female Performance in Film" award at the 2016 Screen Nation Awards.

Nathalie received the "Merit - Honorary Award" at the 2020 CinEuphoria Awards.

She is a Vegan.

She is of Dominican and English origin.

Nathalie's birthday is in 200 days

Where is Nathalie from?

She was born in Southend-on-Sea, England, UK.