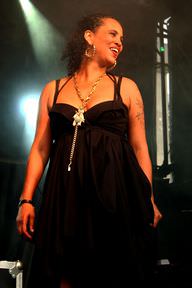 Neneh Cherry is a well-known Swedish singer and songwriter who is widely considered as one of the most influential musicians of her time. Her sweet voice has captivated the hearts of people all over the world.

She is a broadcaster, a rapper, and an occasional DJ. Her sound, a ground-breaking fusion of music and genres, propelled her to the tremendous UK and global success with Buffalo Stance in 1988, followed by Manchild and Woman.

She's released a number of successful albums, including "aw Like Sushi," "Homebrew," and "Broken Politics."

Cher, Gang Starr, Robyn, Four Tet, and Gorillaz are just a few of the top musicians with whom she has collaborated with.

She was born to Moki Cherry and Ahmadu Jah.

She studied at Dartmouth College.

Her mother worked as a painter and a textile artist while her father was a veteran musician.

Neneh's birthday is in 95 days

Where is Neneh from?

She was born in Stockholm, Sweden.