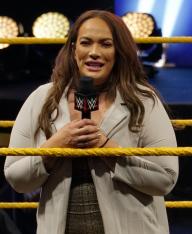 This file has been extracted from another file: Nia Jax Axxess2018.jpg

Savelina Fanene, known by the ring name, Nia Jax is an Australian-American professional wrestler, who doubles as a popular model. Fanene is best known as a former WWE Raw Women’s Champion.

She is related to famous, actor, producer and former professional wrestler, Dwayne “The Rock” Johnson. Her father, Joseph Fanene is a cousin to Dwayne Johnson’s grandfather Peter Maivia.

In 2016, Pro Wrestling Illustrated named her Rookie of the Year.

Fanene was ranked number 8 on the list of top 50 female singles wrestlers in 2018.

Sports Illustrated ranked her number 12 in the Top 30 female wrestlers of 2018.

She took part in season 7 of Total Divas.

Before pursuing her wrestling career, she worked as a plus-size model.

Where is Nia from?

She was born in Honolulu, Hawaii, U.S..

What is Nia Jax's height?

Nia Jax is a famous Australian-American wrestler and model, who was born on May 29, 1984. As a person born on this date, Nia Jax is listed in our database as the 18th most popular celebrity for the day (May 29) and the 78th most popular for the year (1984).

People born on May 29 fall under the Zodiac sign of Gemini, the Twins. Nia Jax is the 538th most popular Gemini.

Aside from information specific to Nia Jax's birthday, Nia Jax is the 4016th most famous American and ranks 12th in famous people born in Honolulu, Hawaii, U.S.

In general, Nia Jax ranks as the 6248th most popular famous person, and the 84th most popular wrestler of all time. “The Famous Birthdays” catalogs over 40,000 famous people, everyone, from actors to actresses to singers to tiktok stars, from serial killers to chefs to scientists to youtubers and more. If you're curious to see who was born on your birthday, you can use our database to find out who, what, where, when and why. You can search by birthday, birthplace, claim to fame or any other information by typing in the search box, or simply browse our site by selecting the month, the day, the horoscope, or any other clickable option.