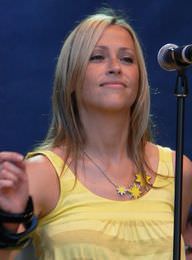 Nicole Appleton is a seasoned Canadian singer, songwriter, television presenter, and actress who rose to prominence in the mid-to-late 1990s with the English group All Saints and the musical pair Appleton, which she formed with her sister Natalie Appleton.

She was most recognized for spearheading the charge and diversifying the paths for female performers to pursue music professionally. She was instrumental in helping the aforementioned bands achieve their creative peak with multiple top-charting recordings such as "All Saints," "Saints & Sinners," and "Testament."

In addition, Appleton is known for her exceptional performance in scores of projects, including "Cover Me Canada”, "Santa Claus: The Movie", "The X Factor NZ", and "Honest".

Her other siblings are Lori Appleton, and Lee Appleton.

She is the offspring of Mary Appleton and Kenbut Appleton.

Nicole Appleton is a product of Sylvia Young Theatre School.

She is of Jewish descent and stands at a height of 1.68 m tall

She's hosted a number of shows, including "Cover Me."

Nicole Appleton's birthday is on December 7, 1974.

Nicole's birthday is in 63 days

Where is Nicole from?

She was born in Hamilton, Ontario, Canada.