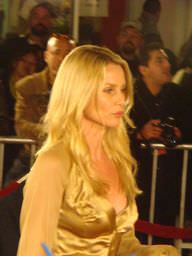 She is an English-American actress, writer, and producer, who is known to have started off her career as a fashion model. Nicollette Sheridan soon earned herself a role on ABC's 1984 short-lived soap opera, "Paper Dolls". She landed herself a role, the following year, on the American adventure comedy film, entitled "The Sure Thing" alongside stars such as John Cusack, Nicollette Sheridan, Viveca Lindfors, and Daphne Zuniga.

Her father was Arthur Sheridan, while her mother was Sally Adams. She got married to American actor, Harry Hamlin in 1991, a short-lived marriage that was dissolved in 1992. Between 2015 and 2018, she was wedded to Aaron Phypers.

She also received the "Outstanding Performance by an Ensemble in a Comedy Series" at the 2005 and 2006 Screen Actors Guild Awards.

She was nominated for the "Outstanding Performance by an Ensemble in a Comedy Series" at the 2007, 2008, and 2009 Screen Actors Guild Awards.

People born on November 21 fall under the Zodiac sign of Scorpio, the Scorpion. Nicollette Sheridan is the 1625th most popular Scorpio.

In general, Nicollette Sheridan ranks as the 19464th most popular famous person, and the 2336th most popular actress of all time. “The Famous Birthdays” catalogs over 25,000 famous people, everyone, from actors to actresses to singers to tiktok stars, from serial killers to chefs to scientists to youtubers and more. If you're curious to see who was born on your birthday, you can use our database to find out who, what, where, when and why. You can search by birthday, birthplace, claim to fame or any other information by typing in the search box, or simply browse our site by selecting the month, the day, the horoscope, or any other clickable option.