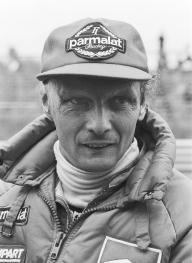 Andreas Nikolaus Lauda, simply known as Nikki Lauda was an Austrian Formula One driver and aviation entrepreneur regarded as one of the best F1 drivers of all time.

He is most remembered for winning the F1 World drivers’ Champion title thrice, and for setting the record of being both a Ferrari and McLaren champion.

His grandfather was a famous industrialist known as Hans Lauda. He had two sons, Lukas and Mathias from his first marriage to Marlene Knaus, and twins from his second marriage to Birgit Wetzinger.

He appeared at the end of 2013 film, "Rush"; a dramatization of the 1976 F1 season’s contest between James Hunt and himself.

He was the founder of three airlines namely, Lauda, Niki and Lauda Air.

He managed the Jaguar F1 racing team for two years and also consulted for Scuderia Ferrari.

He could speak Italian, Austrian German and English fluently.

Niki Lauda's birthday is in 119 days

How old was Niki Lauda when he died?

Niki Lauda would be 72 years old if he was alive today.

Where was Niki Lauda from?

He was born in Vienna.

Niki Lauda was a famous Austrian race car driver, who was born on February 22, 1949. As a person born on this date, Niki Lauda is listed in our database as the 19th most popular celebrity for the day (February 22) and the 25th most popular for the year (1949).

People born on February 22 fall under the Zodiac sign of Pisces, the Fish. Niki Lauda is the 411th most popular Pisces.

Aside from information specific to Niki Lauda's birthday, Niki Lauda is the 4th most famous Austrian and ranks 1st in famous people born in Vienna.

In general, Niki Lauda ranks as the 5004th most popular famous person, and the 7th most popular race driver of all time. “The Famous Birthdays” catalogs over 40,000 famous people, everyone, from actors to actresses to singers to tiktok stars, from serial killers to chefs to scientists to youtubers and more. If you're curious to see who was born on your birthday, you can use our database to find out who, what, where, when and why. You can search by birthday, birthplace, claim to fame or any other information by typing in the search box, or simply browse our site by selecting the month, the day, the horoscope, or any other clickable option.