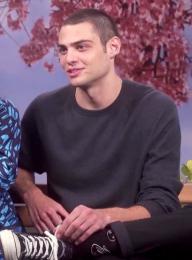 Noah Gregory Centineo is an American actor and model best noted for his performances in Disney film, How to Build a Better Boy (2014), television series, The Fosters, and the 2018 romantic comedy films Sierra Burgess Is a Loser, and To All the Boys I’ve Loved Before.

He played the lead character of Jesus Adams Foster in the drama series entitled, The Fosters (2015).

Born to former pastor and businessman, Gregory Vincent Centineo and Kellee Janel Andres, he was raised with his older sister named Taylor. He began dating model, Alexis Ren in 2019.

Centineo was named as one of the Top 10 Breakout Stars at the 2018 IMDb Awards.

In 2018, he won the MTV Movie & TV Award for Best Kiss and Best Breakthrough Performance as well as the Movie Actor category at the Nickelodeon Kids’ Choice Awards.

He launched a nonprofit initiative known as Favored Nations in February 2020 to raise cash for charity.

At age 6, an attack by a Mastiff dog, left him a scar on his face.

Noah's birthday is in 200 days

Where is Noah from?

People born on May 9 fall under the Zodiac sign of Taurus, the Bull. Noah Centineo is the 25th most popular Taurus.

Aside from information specific to Noah Centineo's birthday, Noah Centineo is the 203rd most famous American and ranks 4th in famous people born in Miami, Florida, U.S.

In general, Noah Centineo ranks as the 289th most popular famous person, and the 33rd most popular actor of all time. “The Famous Birthdays” catalogs over 40,000 famous people, everyone, from actors to actresses to singers to tiktok stars, from serial killers to chefs to scientists to youtubers and more. If you're curious to see who was born on your birthday, you can use our database to find out who, what, where, when and why. You can search by birthday, birthplace, claim to fame or any other information by typing in the search box, or simply browse our site by selecting the month, the day, the horoscope, or any other clickable option.