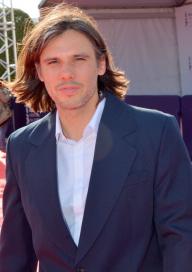 Aurélien Cotentin, known professionally as Orelsan, is a French rapper, songwriter, record producer, actor and film director. He garnered attention with his debut album, Perdu d'avance in 2009. He followed that up with Le chant des sirens and La fête est finie in 2011 and 2017 respectively.

Orelsan is also popular for being a member of the hip hop duo, Casseurs Flowters, which he formed with French rapper, Gringe.

He is the son of a former middle school principal (father) and a former teacher (mother).

In 2009, he won the MTV Europe Music Award for Best French Act. He was also the recipient of the Prix de la Création Musicale for Songwriter of the Year in 2013.

Orelsan's birthday is in 313 days

Where is Orelsan from?

He was born in France.

Orelsan is a famous French rapper, who was born on August 1, 1982. As a person born on this date, Orelsan is listed in our database as the 107th most popular celebrity for the day (August 1) and the 515th most popular for the year (1982).

People born on August 1 fall under the Zodiac sign of Leo, the Lion. Orelsan is the 3246th most popular Leo.

Aside from information specific to Orelsan's birthday, Orelsan is the 785th most famous French and ranks 21st in famous people born in France.

In general, Orelsan ranks as the 34128th most popular famous person, and the 973rd most popular rapper of all time. “The Famous Birthdays” catalogs over 40,000 famous people, everyone, from actors to actresses to singers to tiktok stars, from serial killers to chefs to scientists to youtubers and more. If you're curious to see who was born on your birthday, you can use our database to find out who, what, where, when and why. You can search by birthday, birthplace, claim to fame or any other information by typing in the search box, or simply browse our site by selecting the month, the day, the horoscope, or any other clickable option.