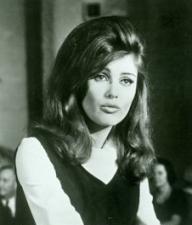 Tiffin was a Golden Globe-nominated actress and model who was acknowledged for her contributions in the film and television industry. She began chasing her acting dreams at a young age after she was unearthed by producer, Hal B. Wallis while she was on a vacation in Hollywood. She gained global fame after playing a role in 1961’s "One, Two, Three" which earned her Golden Globe nominations.

She was married to journalist and magazine editor Clay Felker from 1962 until their divorce in 1969. She wedded philosopher, Edmondo Danon in 1974 with whom she had Aurora and Echo Danon.

At the 1962 Golden Globe Awards, she was nominated for the "Most Promising Female Newcomer" accolade for her role in "Summer and Smoke".

Five years later, she received a Theatre World Award for her performance in "Dinner at Eight”.

She was of British and Russian origin.

She studied at Hunter College.

Tiffin knew how to play the piano.

Pamela's birthday is in 26 days

How old was Pamela when she died?

Where was Pamela from?

She was born in Oklahoma City, Oklahoma, U.S..

People born on October 13 fall under the Zodiac sign of Libra, the Scales. Pamela Tiffin is the 2480th most popular Libra.

Aside from information specific to Pamela Tiffin's birthday, Pamela Tiffin is the 16218th most famous American and ranks 39th in famous people born in Oklahoma City, Oklahoma, U.S.

In general, Pamela Tiffin ranks as the 30559th most popular famous person, and the 3219th most popular actress of all time. “The Famous Birthdays” catalogs over 40,000 famous people, everyone, from actors to actresses to singers to tiktok stars, from serial killers to chefs to scientists to youtubers and more. If you're curious to see who was born on your birthday, you can use our database to find out who, what, where, when and why. You can search by birthday, birthplace, claim to fame or any other information by typing in the search box, or simply browse our site by selecting the month, the day, the horoscope, or any other clickable option.