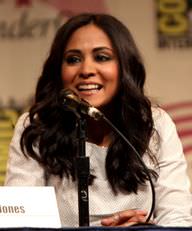 Parminder Nagra is an English actress who made a name for herself portraying Dr. Neela Rasgotra from NBC's hit medical drama TV series ER, Jess from the 2002 romantic sports and comedy-drama film Bend It Like Beckham and Meera Malik from NBC crime thriller series The Blacklist.

She was born to Nashuter and Sukha Nagra. She grew up with three younger siblings. In 2009, she got married to James Stenson, with whom she had a son named Kai. The marriage ended in divorce in 2013.

In 2004, she served as one of the Olympic torch bearers as it made its way through London to Athens for the 2004 Summer Olympics.

In addition to English, she speaks Punjabi very fluently.

Parminder's birthday is in 1 day

Where is Parminder from?

She was born in Leicester, Leicestershire, England, UK.