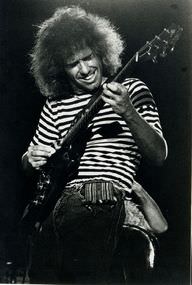 Growing up, Pat Metheny listened to musicians like Miles Davis, Wes Montgomery, and The Beatles which made him fall in love with music. On his twelfth birthday, he got himself a guitar which marked the beginning of his career as a guitarist. He’s best known as the frontman of his band known as Pat Metheny Group.

The band released their first eponymous studio album in 1978. He also helped the collective to record other successful albums including “Offramp” and “First Circle”.

Aside from his work with the band, Metheny is also known for his successful career as an independent performer. His first album titled “Bright Size Life” was published in 1976. His other popular album is titled “Watercolors”.

His ability to mix elements of contemporary and progressive jazz has made him one of the adorable musicians in the United States.

Metheny performed in the group alongside musicians like Lyle Mays, Paul Wertico, and Mark Egan. He has also worked together with Jaco Pastorius and Bruce Ditmas on different projects.

His parents, Dave and Lois, were also into music. His brother, Mike Metheny, taught him how to play the trumpet. His marriage to Latifa Metheny has produced two children namely Jeff and Nicolas.

He studied for a week at the University of Miami.

He also won an Echo Award in 2014, and JazzFM’s “Lifetime Achievement Award” four years later. He was selected into the prestigious Royal Swedish Academy of Music in 2018.

In 2012, he formed another music group named Unity Band.

My older brother Mike is an excellent trumpet player. By the time he was 12, he was playing around Kansas City in classical situations. He was already an amazing talent.Pat Metheny

The beauty of jazz is that it's malleable. People are addressing it to suit their own personalities.Pat Metheny

Pat Metheny's birthday is in 256 days

Where is Pat Metheny from?

He was born in Lee's Summit. Missouri, U.S..

Pat Metheny is a famous American guitarist and composer, who was born on August 12, 1954. As a person born on this date, Pat Metheny is listed in our database as the 63rd most popular celebrity for the day (August 12) and the 87th most popular for the year (1954).

People born on August 12 fall under the Zodiac sign of Leo, the Lion. Pat Metheny is the 1671st most popular Leo.

Aside from information specific to Pat Metheny's birthday, Pat Metheny is the 9757th most famous American.

In general, Pat Metheny ranks as the 16173rd most popular famous person, and the 50th most popular guitarist of all time. “The Famous Birthdays” catalogs over 40,000 famous people, everyone, from actors to actresses to singers to tiktok stars, from serial killers to chefs to scientists to youtubers and more. If you're curious to see who was born on your birthday, you can use our database to find out who, what, where, when and why. You can search by birthday, birthplace, claim to fame or any other information by typing in the search box, or simply browse our site by selecting the month, the day, the horoscope, or any other clickable option.