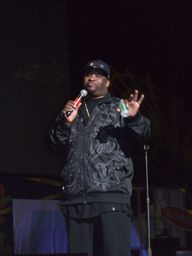 He was an American comedian, actor, and radio host, who began breeding his comic talent from a tender age. He was privileged to make his first performance in 1992. He was uniquely acknowledged for his deconstructive analysis and conversational style, which he adopted into his works.

Patrice O'Neal was able to acquire more audience after appearing on the 2002 - 2004 comedy talk show, "Tough Crowd with Colin Quinn" and on the American radio show, "Opie and Anthony". Between 2006 and 2008, he is noted to have hosted "The Black Phillip Show" on radio.

He dropped his uncut stand up special tagged "Elephant in the Room" for Comedy Central in 2010. After having recorded a highly successful career, he unfortunately died of stroke in 2011.

His mother was Georgia O'Neal. He had a sister named Zinda O'Neal. He was in a romantic relationship with fellow comedian and actress, Vondecarlo Brown and had a daughter named Aymilyon Oneal.

He played football in high school.

O'Neal was diagnosed with type 2 diabetes at the age of 23.

He once turned vegan.

He was named after the Congolese leader, Patrice Lumumba and American activist, Malcolm X.

Patrice's birthday is in 62 days

How old was Patrice when he died?

Patrice O'Neal would be 52 years old if he was alive today.

Where was Patrice from?