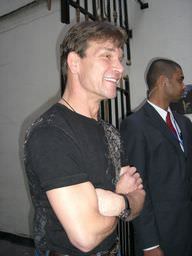 Title
Talking to his fans after "Guys and Dolls".
Author
Conny Liegl from Saarbrücken, Germany
Source
http://commons.wikimedia.org/wiki/File:Patrick_Swayze_2006.jpg
License
CC BY 2.0

Patrick Swayze was an American actor, singer and dancer. He is best known for his role as Johnny Castle in the film "Dirty Dancing" (1987).

He has a star on the Hollywood Walk of Fame since 1997. He was a major sex symbol during the late 80's and early 90's and People magazine's 1991 sexiest man alive.

He was nominated for 3 Golden Globes during his career.

He was married to Lisa Niemi. He died of pancreatic cancer in 2009.

He was a certified pilot. He made the news in 2000, when he flew with his dogs in his Cessna private plane from Van Nuys, California to Las Vegas!

Patrick's birthday is in 262 days

How old was Patrick when he died?

Patrick Swayze would be 70 years old if he was alive today.

Where was Patrick from?