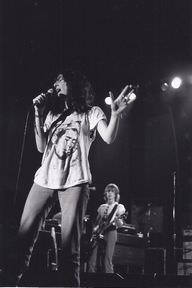 Patti Smith is an American singer-songwriter and poet whose 1975 debut album Horses turned her into an influential figure of the New York City punk scene. She is known internationally for her 1978 hit song Because the Night, which she co-wrote with Bruce Springsteen. She was placed at the 47th position on Rolling Stone magazine's 2010 list of 100 Greatest Artists.

She married Fred "Sonic" Smith in 1980. The couple had two children: a son named Jackson and a daughter named Jesse. Fred died of a heart attack in 1994.

In 2005, the French Ministry of Culture honored her by making her a Commander of the Ordre des Arts et des Lettres. She was inducted into the Rock and Roll Hall of Fame in 2007. In 2011, she was honored with the Polar Music Prize.

Patti's birthday is in 94 days

Where is Patti from?