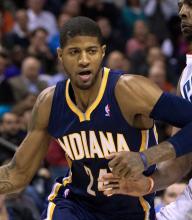 This file has been extracted from another file: Anthony Tolliver defending Paul George.jpg

Also known by his nickname PG-13, American professional basketball player Paul George has made a name for himself through his career in the National Basketball Association (NBA). The small forward / shooting guard entered the 2010 NBA draft following a two-season college career with Fresno State University’s basketball team. He made his NBA debut with the Indiana Pacers where he stayed until 2017. He had a two-year stint with Oklahoma City Thunder and joined the Los Angeles Clippers in 2019.

He is the son of Paulette and Paul George who raised him in California alongside two elder sisters: Teiosha and Portala. He has a daughter named Olivia.

He played as a member of the US Olympic team that won the gold medal at the 2016 games.

Paul's birthday is in 267 days

What is Paul George's height?