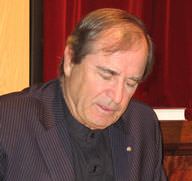 Paul Theroux made a name for himself as a novelist, travel writer, literary critic and short story writer. He has risen to fame through his books, some of which have been made into feature films. His most popular works include “The Great Railway Bazaar”, “The Mosquito Coast”, “The Old Patagonian Express” and “Dark Star Safari”. In the 1960s, he taught English at Makerere University in Uganda and the National University of Singapore.

He was one of seven children born to Albert Eugene Theroux and Anne Dittami. His brothers Peter and Alexander Theroux also became noted authors. He has been married twice; first to Anne Castle from 1967 to 1993 and then to Sheila Donnelly in 1995. His sons Louis and Marcel Theroux are also authors.

His books “Jungle Lovers” and “Saint Jack” were banned in Malawi and Singapore respectively.

Paul's birthday is in 194 days

He was born in Medford, Massachusetts, U.S..