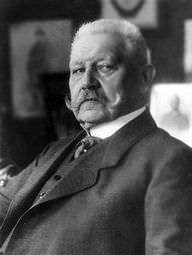 Paul von Hindenburg was a German military officer and politician best remembered for his exploits during World War One as well as for being the second President of Germany, a position he held from 1925 until his demise in 1934. Prior to becoming President of Germany, he served as the Chief of the German General Staff.

Hours after his death in 1934, Hitler seized the powers of the president for himself.

He is widely regarded as the greatest war hero in Germany's history.

Uruguayan politician, 40th List of Presidents of Uruguay|President of Uruguay

Paul's birthday is in 49 days

Paul von Hindenburg would be 174 years old if he was alive today.

He was born in Poznań, Prussia.