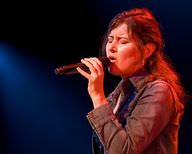 Paula Cole’s journey to stardom began in 1993 after she was added to the list of performers on Peter Gabriel's ‘Secret World Live’ music tour. She was later signed by Imago Records through which she issued her first album titled “Harbinger” in 1994.

The American singer became a global celebrity two years later after she released her second album which was under the name “This Fire”. By the end of 2021, she had released a total of ten studio albums.

She and her sister, Irene were born to Jim Cole, a university professor and his wife Stephanie Cole, who worked as an elementary school teacher. Between 2002 and 2007, she was married to Hassan Hakmoun. During their time together they raised a child named Sky.

Cole is a product of Rockport High School. She was also trained at Boston’s Berklee College of Music.

At the 1998 edition of the Grammy Awards, she received the “Best New Artist” prize. That same year, she won a Boston Music Award for her song titled "Where Have All The Cowboys Gone?".

She sang the "God Bless America" patriotic song at the Major League Baseball All-Star Game in 2007.

Paula's birthday is in 187 days

Where is Paula from?

She was born in Rockport, Massachusetts, U.S..