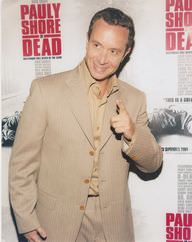 Paul Montgomery Shore is a well-known American comedian and actor noted for his roles in comedy films such as Encino Man (1992), Son in Law (1993) and Bio-Dome (1996).

He began a career in stand-up comedy at age 17 and became an MTV VJ in 1989. He opened several show sets for his mentor, Sam Kinison.

He was the voice behind Bobby Zimmeruski in the animated film, A Goofy Movie (1995).

In 2003, he wrote, produced and performed in a semi-autobiographical mockumentary titled Pauly Shore Is Dead which was his most successful film.

His parents were comedian Sammy Shore, and Mitzi Shore, founder of The Comedy Store.,

Shore worked with MTV as a VJ from 1989 to 1994 and hosted his show titled, Totally Pauly as well as the annual MTV Spring Break parties.

His alter ego known as “The Weasel” is noted for the catchphrase, “Hey, BU-DDY”.

Few if any teenagers can relate to getting up for school and finding famous comics like Pryor and Williams hanging out in your living room after a hard night of partying. But that's Hollywood.Pauly Shore

My mom is two people to me. She's my mom number one, and then she's this lady most comedians know as being a legendary owner of a nightclub that's responsible for starting a lot of heavy careers.Pauly Shore

Pauly Shore's birthday is in 54 days

Where is Pauly Shore from?

He was born in Hollywood, California, U.S..

People born on February 1 fall under the Zodiac sign of Aquarius, the Water Bearer. Pauly Shore is the 1651st most popular Aquarius.

Aside from information specific to Pauly Shore's birthday, Pauly Shore is the 12959th most famous American and ranks 19th in famous people born in Hollywood, California, U.S.

In general, Pauly Shore ranks as the 22427th most popular famous person, and the 270th most popular comedian of all time. “The Famous Birthdays” catalogs over 40,000 famous people, everyone, from actors to actresses to singers to tiktok stars, from serial killers to chefs to scientists to youtubers and more. If you're curious to see who was born on your birthday, you can use our database to find out who, what, where, when and why. You can search by birthday, birthplace, claim to fame or any other information by typing in the search box, or simply browse our site by selecting the month, the day, the horoscope, or any other clickable option.