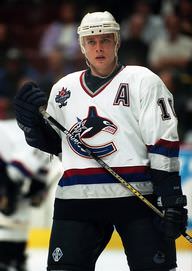 Russian retired ice hockey player Pavel Bure was given the nickname “the Russian Rocket” as a result of his speed while skating after a ball. A right-wing, he played in the National Hockey League (NHL) for 12 seasons with the clubs: the New York Rangers, Vancouver Canucks and Florida Panthers.

Prior to getting his NHL start through the 1989 draft where he was picked by the Canucks, he had played with the HC CSKA Moscow, a professional ice hockey club in Russia.

He represented the Soviet Union and Russia in international competitions.

He is the son of Tatiana and Vladimir Bure, a retired freestyle swimmer and fitness coach. He is also the brother of former NHL player Valeri Bure. He has three children with model Alina Khasanova, whom he married in 2008.

In 2007, he won a suit he filed against British Airways after he was kicked off a flight in 2006.

Pavel's birthday is in 175 days

Where is Pavel from?

He was born in Moscow, Russian SFSR, Soviet Union.

What is Pavel Bure's height?