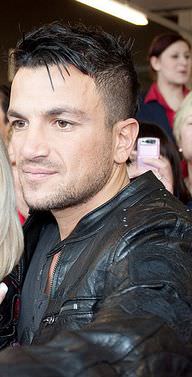 His parents are Savvas Andrea and Thea Andrea. He married glamor model and “I'm a Celebrity...Get Me Out of Here!” co-star, Katie Price in 2005 and had two children, Junior Savva and Princess Tiaamii Crystal Esther. They, however, divorced in 2009.

He remarried Emily MacDonagh in 2015, and had two children with her known as Amelia and Theodore James.

At age 16, he won a $146,000 recorded contract after participating in Australian talent show, New Faces.

His second single, “Gimme Little Sign” peaked at number 3 and stayed on the Australian charts for 31 weeķs.

He received an ARIA award for highest-selling Australian single of the year in 1993.

He appeared on the third series of 'I'm a Celebrity...Get Me Out of Here!', as well as the thirteenth series of ‘Strictly Come Dancing’.

He was brought up as a Jehovah's Witness.

It's amazing how stress keeps you trim.Peter Andre

Peter Andre is a famous Australian singer-songwriter and actor, who was born on February 27, 1973. As a person born on this date, Peter Andre is listed in our database as the 13th most popular celebrity for the day (February 27) and the 71st most popular for the year (1973).

People born on February 27 fall under the Zodiac sign of Pisces, the Fish. Peter Andre is the 551st most popular Pisces.

Aside from information specific to Peter Andre's birthday, Peter Andre is the 125th most famous Australian.

In general, Peter Andre ranks as the 6712th most popular famous person, and the 702nd most popular singer of all time. “The Famous Birthdays” catalogs over 25,000 famous people, everyone, from actors to actresses to singers to tiktok stars, from serial killers to chefs to scientists to youtubers and more. If you're curious to see who was born on your birthday, you can use our database to find out who, what, where, when and why. You can search by birthday, birthplace, claim to fame or any other information by typing in the search box, or simply browse our site by selecting the month, the day, the horoscope, or any other clickable option.