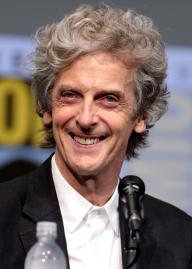 Peter Capaldi is a multiple award-winning actor best known for playing the Malcolm Tucker role in the comedy series “The Thick of It”. Considered as one of the best Scottish actors of all-time, Capaldi has played notable roles in films and television shows like “In the Loop” and “Doctor Who”.

Capaldi showed glimpses of his talent when he performed at a local puppet show while he was in primary school. By the time he got to high school, he was performing with the Antonine Players group. His first notable onscreen work came in the 1982 film titled “Living Apart Together”.

He’s the son of Nancy and Gerald John Capaldi. Actress Elaine Collins became his wife in 1991, and together they have one daughter.

Throughout his career, Capaldi has been decorated with many awards. Some of these accolades are British Academy Television Award, BAFTA Award, and Academy Award.

Aside from acting, he has also worked as a director and writer. He wrote the 1992 comedy film “Soft Top, Hard Shoulder”.

He’s known for his humanitarian works which has seen him work for organizations like Worldwide Cancer Research, and Aberlour Child Care Trust.

Peter's birthday is in 83 days

Where is Peter from?

He was born in Glasgow.

People born on April 14 fall under the Zodiac sign of Aries, the Ram. Peter Capaldi is the 1304th most popular Aries.

Aside from information specific to Peter Capaldi's birthday, Peter Capaldi is the 100th most famous Scottish and ranks 1st in famous people born in Glasgow.

In general, Peter Capaldi ranks as the 16982nd most popular famous person, and the 2245th most popular actor of all time. “The Famous Birthdays” catalogs over 40,000 famous people, everyone, from actors to actresses to singers to tiktok stars, from serial killers to chefs to scientists to youtubers and more. If you're curious to see who was born on your birthday, you can use our database to find out who, what, where, when and why. You can search by birthday, birthplace, claim to fame or any other information by typing in the search box, or simply browse our site by selecting the month, the day, the horoscope, or any other clickable option.