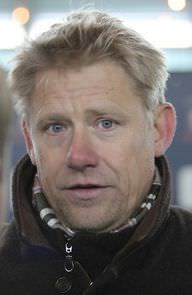 He is a former Danish football player who is noted to have played as a goalkeeper during his playing days. Due to his outstanding performances, in 1992 and 1993, Peter Schmeichel earned himself an achievement for the "IFFHD World's Best Goalkeeper".

Schmeichel boasts of remarkable playing career which includes having captained the gigantic English club, Manchester United to a win at the 1999 UEFA Champions League Finals.

He was born to mother, Inger Schmeichel, who was a nurse. His father was a Polish jazz musician, Antoni Schmeichel. He is noted to have three sisters.

He married Bente Schmeichel in 1991 but they divorced in 2013. He got married to a long-time lover and model, Laura von Lindholm in 2019. His children include; Cecilie and Danish footballer, Kasper Schmeichel.

He helped his country lift the "UEFA European Championship" in 1992.

Schmeichel featured in the Aston Villa team that won the "UEFA Intertoto Cup" in 2001.

Schmeichel was named the "UEFA Goalkeeper of the Year” for two consecutive years – 1992 and 1993. He also claimed the award in the year 1998.

Peter's birthday is in 350 days

Where is Peter from?

He was born in Gladsaxe, Denmark.

What is Peter Schmeichel's height?

People born on November 18 fall under the Zodiac sign of Scorpio, the Scorpion. Peter Schmeichel is the 1967th most popular Scorpio.

In general, Peter Schmeichel ranks as the 24797th most popular famous person, and the 790th most popular soccer player of all time. “The Famous Birthdays” catalogs over 40,000 famous people, everyone, from actors to actresses to singers to tiktok stars, from serial killers to chefs to scientists to youtubers and more. If you're curious to see who was born on your birthday, you can use our database to find out who, what, where, when and why. You can search by birthday, birthplace, claim to fame or any other information by typing in the search box, or simply browse our site by selecting the month, the day, the horoscope, or any other clickable option.