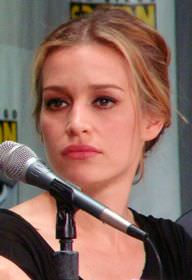 Piper Perabo is an American actress.

She has been nominated for a Golden Globe and 2 MTV Movie Awards (1 win).

She was born in Texas in 1976. She is of German, English, Irish and Norwegian descent. She is married to director Stephen Kay. "Game of Thrones" actress Lena Headey is her best friend.

She supports the LGBT rights, as well as same-sex marriage.

Piper's birthday is in 27 days

Where is Piper from?