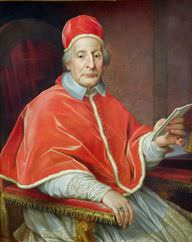 Leader of the Catholic Church

Pope Clement XII, whose original name was Lorenzo Corsini, was made the Archbishop of Nicomedia in 1690 before becoming the governor and treasurer-general of the Castel Sant'Angelo. In 1706, under the leadership of Pope Clement XI, he was appointed as Santa Susanna’s Cardinal-Priest.

He served in other positions in the Roman Catholic Church before he was elected as the Pope in 1730. By the election, he also became the head of the revered Papal States. His tenure lasted for a decade through which he helped to improve the finances of the states. He also played key roles in the construction of some memorable structures including the Trevi Fountain, and the Basilica di San Giovanni in Laterano.

He was the son of Elisabetta Strozzi and Bartolomeo Corsini, who were both from noble families. As a lawyer, he worked under Cardinal Neri Corsini, who happened to be his uncle.

Corsini read law at Italy’s University of Pisa. Prior to that, he attended the Jesuit Collegio Romano.

After battling with gout, he gave up the ghost in 1740.

In 1738, he became the first Pope to publicly condemn the Freemasonry organization.

Clément's birthday is in 185 days

How old was Clément when he died?

Pope Clement XII would be 370 years old if he was alive today.

Where was Clément from?

He was born in Florence, Grand Duchy of Tuscany.