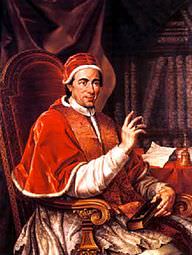 Pope Clement XIV served as the head of the Roman Catholic Church and the ruler of the Papal States from 1769 to 1774. In the year of his election as the Pope, he was the only cardinal from a Franciscan order.

His pontificate was marked by his decree of the suppression of the Society of Jesus. Since his reign ended, no other pope has taken the name “Clement”.

He was born Giovanni Vincenzo Antonio Genganelli to Angela Serafina Maria Mazza and Lorenzo Ganganelli. He became an ordained priest in 1731 and was created a cardinal in 1759 by Pope Clement XIII.

How old was Pope Clement XIV when he died?

Pope Clement XIV would be 316 years old if he was alive today.

Where was Pope Clement XIV from?