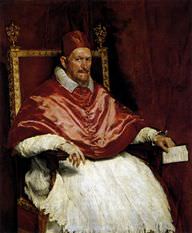 Before being named as the leader of the Catholic Church, Pope Innocent X, who was born Giovanni Battista Pamphili, worked as a lawyer. In 1604, he worked in the Roman Rota as an auditor. He served in Philip IV of Spain’s court before he was made a Cardinal in 1629.

After the death of Pope Urban VIII in 1644, Pamphili was named as one of the candidates to head the Roman Catholic Church. Later that year, an election was held and he was elected to be the leader of the church. By his election, he was also made the overlord of the sacred Papal States.

He was known for his public decree which condemned the practice of Jansenism. His tenure was affected by some political events including the Civil Wars in England.

A member of the famous Pamphili family, Giovanni was born to Camillo Pamphili.

He studied at the famous Roman College.

He represented the Papal States in Spain, Naples, and France.

When is Pope Innocent X's birthday?

In how many days is Pope Innocent X's birthday?

How old was Pope Innocent X when he/she died?

When did Pope Innocent X die?

How old would Pope Innocent X be today?

Pope Innocent X would be 448 years old if he/she was alive today.

Where was Pope Innocent X from?