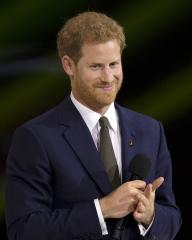 Prince Harry is the Duke of Sussex. He is the second and last child of Charles, Prince of Wales and the late Lady Diana.

Prince Harry was appointed Duke of Sussex by his grandmother, Queen Elizabeth II, in 2018. In 2005, Harry became a student at the Royal Military Academy Sandhurst, marking the beginning of his period as an active member of the British armed forces. The highlight of his military career came when in 2012 he actually spent 20 weeks fighting in Afghanistan as a helicopter co-pilot and gunner, despite the Taliban threatening him directly. Since then, Prince Harry has made it his mission to provide assistance to wounded military personnel.

When Harry reached 21 years of age, the Queen granted him the title of Counsellor of State, which only senior members of the British Royal Family are eligible for. Using this title, he has completed tasks such as launching an initiative against HIV/AIDS in Lesotho as well as visiting a number of countries including Belize, Jamaica, Australia and Italy.

Under the title of Duke of Sussex, Prince Harry has agreed to embark on a global HIV treatment campaign alongside English superstar Elton John.

Prince Harry married Meghan Markle, an American actress, in 2018. And his older brother is Prince William, Duke of Cambridge.

In 1997, Prince Harry together with his father took a trip to South Africa, where he met with African legend, Nelson Mandela. He also watched a performance from Spice Girls during their visit to South Africa.

On his 18th birthday, which was in 2002, his grandmother, the Queen of England granted him a personal Coat of Arms as a birthday gift.

In 2002, Prince Harry confessed to the usage of marijuana and alcohol abuse when he was only 16 years of age.

Harry caused great controversy in 2005 when he was pictured dressed in a Nazi uniform during a costume party. He later came out to apologize.

He was the ‘best man’ for his brother’s (Prince William) wedding to Kate Middleton in 2011.

Harry is an ardent fan of the English football club Arsenal. He often attends their games.

Prince Harry's birthday is in 224 days

Where is Prince Harry from?