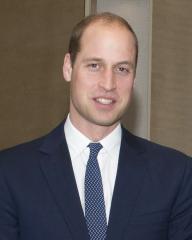 Prince William, Duke of Cambridge, was born on 21 June 1982. He is first in line to the British throne and is expected to be King of England one day. Prince William began his royal career at the age of 21 after being appointed Counselor of State by his grandmother, Queen Elizabeth II. He was officially given the title Duke of Cambridge in 2011. Since then, he has served in a number of capacities, most notably making international trips on behalf of the British monarchy. Additionally he had a brief military career, with the prospect of making a lifelong endeavor out of it not being a realistic option for British royalty.

Prince William has also been active in a number of humanitarian causes, including volunteering with the British Red Cross and working at the Royal Marsden Hospital. He is also Patron on 100 Women in Hedge Funds.

Prince William is a football fan and a known supporter of the Aston Villa football club. Moreover he became President of England’s Football Association in 2006, as well as Vice Royal Patron of the Welsh Rugby Union in 2007.

Prince William goes by the nickname – “Willis” or “Wombat”, which are two adorable names given to him by the media and his parents respectively.

After William’s graduation from college, he took a gap year, during which he partook in the British military’s training. He also visited Chile and Africa during his gap year.

In 2001, Prince William secured an admission to study at the University of St. Andrews in Scotland, where he initially enrolled in a degree in Art History. The Prince successfully graduated with a Scottish Master of Arts degree. In order to disguise himself and avoid the unnecessary attention of paparazzi, William preferred to be known as “Steve” during his time at the University.

As a child, William’s first career ambition was to become a police officer.

In 2013, William broke royal tradition when he personally drove his newly born son – George together with his wife from the hospital to their home.

Prince William was born at the St. Mary’s Hospital and as such, he became the first heir to the British Royal Chair to be born in a hospital.

In June 2018, as part of his royal duties, William officially visited Palestine and Israel. During his visit, he had a meeting with Israeli Prime minister, Benjamin Netanyahu in Jerusalem and in Ramallah, he met with Mahmoud Abbas, the President of Palestine. His visit made him the first Royal member of the British Monarchy to do so since 1948.

King of the United Kingdom

Prince William's birthday is in 205 days

Where is Prince William from?