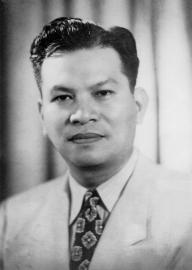 Ramon Magsaysay was a Filipino leader who served as the country’s 7th President. Before becoming the Head of State, he served in the Philippine House of Representatives as Secretary of National Defense. He was a congressman for the district of Zambales.

Posthumously - Member of the Order of the Golden Heart

He died in an aircraft disaster in 1957.

He was a military governor who was later appointed as a guerrilla leader during the Asia Pacific War.

Before his political career, he was a professional automobile mechanic.

Ramon Magsaysay's birthday is in 335 days

How old was Ramon Magsaysay when he died?

Ramon Magsaysay would be 115 years old if he was alive today.

Where was Ramon Magsaysay from?

He was born in Iba, Zambales, Philippines.